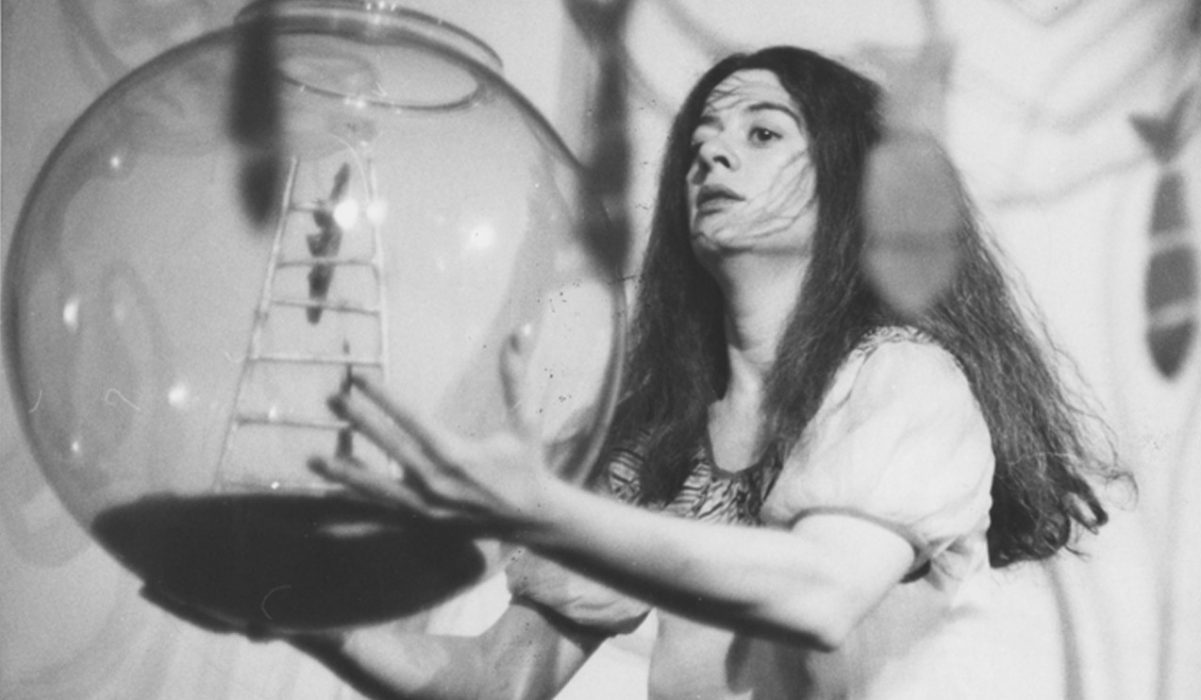 “Nagrin was a multi-media artist almost before the term was invented. She is an actress, producer, director, writer, painter, sculptor, singer and various of these talents are used in the work she produces.”  –Doris Deither, The Villager, March 12th, 1997

“Rather like the great experiment that was the avant-garde theater in New York for the second half of the 20th century. “Behind the Lid” is an evocation not only of Ms. Nagrin but an entire theatrical subculture that now has only a flickering existence.”  –Ben Brantley, New York Times, Saturday, June 16, 2007

“Behind the Lid is a loving tribute to Twist’s great friend and early champion Lee Nagrin, the piece offering a mixed-form excavation and homage to her life and work. Twist and his company have devised a memoir consisting of nine tableaux with various puppets and moving objects, with a large puppet of Nagrin in late life appearing in most scenes; they guide the 18 person audience from station to station, and with each scene they carry Nagrin’s aesthetic pearls to the surface, showing us her thought fragments and defining traits.”  –Tom Sellar, The Village Voice, June 20-26, 2007

“The avant-garde theatre pioneer Lee Nagrin, who died on June 7, and Basil Twist spent nine years collaborating on this dense, strange and beautiful work. Set in the basement galleries where Nagrin worked, its scenes are like a mummy portrait of this highly unconventional storyteller and experimental artist, represented here by multiple puppets. The piece traces the symbolic events of Nagrin’s lifetime: the bombing of Hiroshima, encountering Artaud and Beckett, recollections of her mother and father (both embodied by the protean Twist, in costume). Twist slips through the work, barefoot and lithe, beckoning the audience to follow him into Nagrin’s imagination. We do so willingly, with no small measure of gratitude.   –  The New Yorker, July 2, 2007

”By this sharing of her personal family and opportunity of transformation, Lee Nagrin has prepared an initiation into the realms of community and intimacy…Master storyteller, Lee Nagrin’s narration of Brother Bert’s rites of passage has a tremendous artistry and spiritual redemption for her, her family of near and remote kin. She has lit a lamp inside the dark recesses of the human fear of the dying process. We can learn from her and add more lamps to our feet…’ve gone on record in stating how Lee Nagrin is a hub of creative energy. She truly can tell us the stories we must digest. “  –B. Jennings, Attitude, The Dancer’s Magazine, Winter 2000, Volume 15. No 3

”Like many of this century’s great modernist creators of visual theater (Kadinsky, Popova, Exter, Schumann, Wilson), Nagrin is a painter and her good eye combined with her good ear and voice help her to produce concise abstract theater combining dance, text, music, singing, stage design, and performing objects with a strong, full vision…Angel’s Elegy hearkens back to the simple, do-it-yourself aesthetics of the `60’s and `70’s performance in churches, storefronts, and lofts, and does everything right. Nagrin herself-a white manned, soft spoken, sturdy woman-performs singing Meredith Monk –style melismas and moving her large graceful body in repeated patterns of rising and falling…Angels Elegy has the pace and wonder of an Elizabethan masque, where striking tableaux unveiled upstage punctuate the action downstage, and Nagrin’s dramatic palette is particularly rich…As in the best traditions of performance art, the piece feels autobiographical…Nagrin presents herself in images, as when she sits in front of an easel lacking a canvas and performs a painter’s dance of arm gestures as self -portraits is projected on the screen in front of her. This is an exquisite moment of theater, and one of many in Angels Elegy.” –John Bell, Theater Week, June 6, 1994

“It has been four years since Lee Nagrin has staged a work in New York, although she picked up an Obie last time. Now we have a three hour, three act extravaganza with a cast of 21, and its marvelous…It is a journey past autobiography into dreams: though music is not prominently featured here, the piece has a scale and amplitude that one associates with opera…While the various episodes can easily come to seem disconnected, on some preconscious level to which the piece speaks, everything fits.”  –Henry F. Baumgartner, The New Common Good, June 1990

”Nagrin creates personal collages, using original vocabularies. With her painterly and sculptural approach to staging, Nagrin also has ties to post-modern and performance art. Bird/Bear seems almost out of its own time…Nagrin’s magical forest so exquisitely evokes a sense of wander at life itself that its naivete may be of the most knowing, and necessary kind.”  –Eileen Blumenthal, The Village Voice, February 25, 1986

”Midway through the first section of Lee Nagrin’s Bone Orchard, there’s a moment of pure image-theater magic: A rain of tiny silver fishes descends from the ceiling on threads, in serried rows, to hang there and glitter while behind them Andrea Goodman dances back and forth, waving high over her head a huge glass fish bowl, inside which is a miniature human figure, climbing over a ladder to a little moon. I have no desire at all to explicate this image, only to cherish it.”  –Michael Feingold, Village Voice, On the Threshold of Theater, 1986

Lee Nagrin is a very special person. You know from seeing her that she is precisely who Hans Christian Anderson had in mind as a good spirit, fairy or Godmother for all his eternal stories… et she belongs to even more than the Scandinavians of lore. The clarity of her performance art spans historical settings and cultures…There are Dravidian legends within her arms length. Nagrin expresses Tibetan austerity with Indian ardor. German wunderkind, Polish magic, dark gypsy soul…As a shaman, she lingers in the continental drift past Atlantis, in that land east of the sun and west of the moon…Her face reveals absolute innocence. Sure you can see that she has lived and died many times, by its physiognomy. She is so alive and filled with life. Life force is death’s current currency. Moreso, her face is John the Baptist’s face; suspended on a plate for Salome’s veils to uncover…that honest, that (un) yielding, that frozen in Medusa’s mirror.”  –By B. Jennings, Attitude: The Dancer’s Monthly, Fall 1986

”Mysteriously beautiful…meticulously performed. Ms Nagrin’s transformation of benign and malign images therefore served as reminders that birds, angels and devils can all have wings and that humans, for good or for ill, have always longed to fly.”  –Jack Anderson, The New York Times, Friday June 6, 1980

“Lee Nagrin’s Bird Devil is rather like a series of dream fragments in which the same elusive characters keep appearing, performing illogical actions in a perfectly logical way. The principle feeling is of a private inner world exposed in the hidden symbolism of dreams-exposed and open to speculation, but not explained.”  –Doris Diether, The Villager, June 26, 1980

Lee Nagrin. She’s a terrific performer. She has presence that indefinable manner of focusing attention and energy around herself on the stage. I’ve always admired this presence, and frequently marveled at her physical range.”  –Robert J. Pierce, The Soho Weekly News, May 31, 1979

“It presents a collage of visual and aural images-some straightforward, some subtle, some obscure-to reveal the spiritual terrain of its creator. Sky Fish focuses on an artist’s special sensibility…A series of juxtaposed images suggests vegetation, aquatic and terrestrial animals, daily human anxieties and transcendent levels of seeing. Sky Fish is just the sort of theater piece I love, a work that invents means to express conditions we otherwise would have no way to discuss.”  –Eileen Blumenthal, The Village Voice, June 4, 1979

Sky Fish is a collection of sights and sounds, some of them grave and mundane, some bizarrely poetic, some naive; some are fantastic actions performed matter-of-factly…. Incomprehensible, utterly believable. The performers work with exceptional subtlety and concentration.  –Deborah Jowitt, The Village Voice, June 18, 1979

‘One is never tired of painting,’ said William Hazlitt, ‘because you have to set down not what you knew already, but what you have discovered. There is a continual creation out of nothing going on.’ I am reminded of this observation from Hazlitt’s ‘The Pleasure of Painting’, after seeing a highly unusual environmental theater-dance which involves the creation of painting…Here is artistic natural birth seen first-hand…At times there are aspects of Robert Wilson, or even Grotowski, to Sky Fish. The players, forming a living collage, are all the while creating their own painting. Throughout one also feels a strange tension, which adds to the theatricality of the event…if you’re interested in a truly off-beat avant-garde adventure in an uncharted area of theater, Sky Fish will be for you. It is a strange but most certainly an art form all of its own.”